Dr. Shamshad Akhtar, is an economist, and has had broad based development experience and held a range of senior positions at national and multilateral organizations. Dr. Akhtar served as the Finance Minister of Pakistan holding multiple economic portfolios in the caretaker government and as the Governor, State Bank of Pakistan.  At the international level she has served as the Under-Secretary General of the Economic and Social Commission of the Asia and Pacific (UNESCAP) and the United Nations Secretary General’s Senior Special Advisor on Economics and Finance and oversaw the development and implementation of the 2030 sustainable development, finance and climate agenda.  For five years she was UN Secretary General’s Sherpa for Development and the Finance and Central Bank tracks. Dr. Akhtar served as Vice President, Middle East and North Africa at the World Bank, and Director General of Asian Development Bank (ADB). She also served as the Special Sr. Advisor to the President of ADB.

Dr. Akhtar has a PhD in Economics and a post-doctorate degree from the University of Harvard.
Presently she is the Chairperson of the Board of the: Pakistan Stock Exchange, Pakistan Institute of Corporate Governance, the Sui Southern Gas Company Ltd., Karandaaz (the DFID-Bill Melinda and Gates Foundation, a joint venture to promote financial and digital financial inclusion), and Engro Pakistan, among others.  She is member of the advisory board of Sustainable Finance Center (SOAS) in the UK. Dr. Akhtar remains engaged in both global and national policy dialogues and is the Global Advisor for the Belt and Road Initiative and Policy Sherpa for Boao Asia Forum and Advisor to the Shanghai Forum. 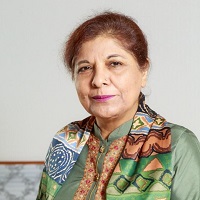