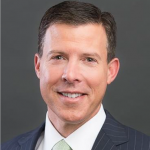 William Sonneborn is Senior Director, International Finance Corporation, overseeing all investments in Disruptive Technologies and Funds. Prior to joining IFC, Bill was the President of EIG and a member of the Investment and Executive Committees. Prior to joining EIG, he was a partner of Kohlberg Kravis Roberts & Co. and a member of KKR’s Management Committee. Bill served as CEO of KKR Asset Management (the public markets side of KKR) as well as CEO and Director of KKR Financial Corporation (NYSE: KFN), a publicly traded specialty finance firm. He also sat on the board of Nephila Capital, a $10 billion Bermuda-based hedge fund in which KKR purchased a stake in 2013. Prior to joining KKR, he was with The TCW Group, Inc., most recently as President and Chief Operating Officer. Previously, he worked at Goldman, Sachs & Co. in New York and Hong Kong, where he focused on mergers & acquisitions. Bill graduated with honors from Georgetown University. He is involved with a variety of non-profit organizations, serving as a director or trustee of the Georgetown University Board of Regents, Georgetown University McDonough School of Business, Lucile Packard Foundation for Children’s Health at Stanford University and St. Albans School. He resides in Washington, DC with his wife, Karen, and their three children