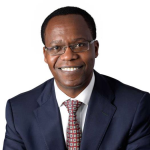 Mr. Gachora is currently the Group Managing Director (GMD) for NCBA Group PLC. Prior to his appointment at NCBA, he was the GMD of NIC Group PLC, from September 2013 to 30th September 2019. NCBA Group PLC was formed on 1st October 2019 following the merger of NIC Group PLC and CBA Bank Limited. Mr. Gachora joined NIC Bank from Barclays Africa where he had been Managing Director and Head of Corporate & Investment Banking. In his role he was responsible for Barclays Corporate and Investment Banking activities across 12 African countries (excl. South Africa).
Prior to this, he held several executive positions at Absa Bank in South Africa, including CEO of Absa Africa and Head of Investment Banking, Sub Saharan Africa. Before moving to South Africa, he spent close to 15 years in the United States where held several positions at both Bank of America and Credit Suisse First Boston. While at Bank of America he rose through the ranks to become a Managing Director and Head of the Financial Engineering team. Mr. Gachora holds a Masters Degree in Electrical Engineering and Computer Science from the Massachusetts Institute of Technology (MIT), USA as well as an MBA from the Wharton School, University of Pennsylvania, USA.