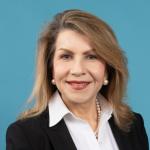 Carmen M. Reinhart is Vice President and Chief Economist of the World Bank Group. Assuming this role on June 15, 2020, Reinhart provides thought leadership for the institution at   an unprecedented time of crisis. She also manages the Bank’s Development Economics Department. She is on public service leave from Harvard Kennedy School, where she is the Minos A. Zombanakis Professor of the International Financial System. Previously, she was  Senior Policy Advisor and Deputy Director at the International Monetary Fund and held positions as Chief Economist and Vice President at the investment bank Bear Stearns.  She also serves in the Advisory Panels of the Federal Reserve Bank of New York and the International Monetary Fund.  Reinhart has been listed among Bloomberg Markets Most Influential 50 in Finance, Foreign Policy’s Top 100 Global Thinkers, and Thompson Reuters' The World's Most Influential Scientific Minds.  In 2018 she was awarded the King Juan Carlos Prize in Economics and NABE’s Adam Smith Award, among others. She holds a Ph.D. from Columbia University.