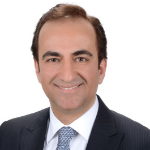 Born in Izmir, Turkey in 1966, Ayhan Albeyoglu graduated from ODTU (Middle East Technical University) in 1989. His banking career started as an auditor and continued as Branch Manager, Regional Manager and Regional Director.

He joined TEB A.S. in 2005 and was appointed Regional Manager for the Marmara Region of Turkey. He went on to become Regional Director of the Istanbul Anadolu Region in 2011. In December 2013, he was appointed Board member and Managing Director of TEB Sh. A. in Kosovo. Under his leadership, TEB Sh. A. received a number of prestigious international awards, including “The Bank of the Year for Kosovo” from The Banker magazine in 2015 and 2016, and “The Best Bank - Kosovo” from Euromoney magazine in 2015. He was appointed the Group Director for SME Banking / Strategic Planning and Marketing of TEB A.S. in April, 2017.