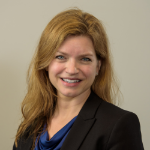 Dawn Miller is the Senior Vice President for Middle Market and Small Commercial Businesses and for Distribution in Continental Europe at Chubb. Most recently, Dawn served as the President and CEO at AXA Insurance Company U.S., the AXA Group's property and casualty commercial insurance subsidiary. Prior to joining AXA as Global Head of P&C Business Development in 2015, Dawn spent 13 years at American International Group (AIG), ultimately serving as Head of Client Engagement for Europe, the Middle East, and Africa. Before her time at AIG, with a desire to experience the dynamic intersection of public/ private partnerships first hand, she spent several years in Prague, leading an investment advisory firm focused on the Central European energy sector privatizations of the time.

Dawn started her professional career as a Risk analyst for the Overseas Private Investment Corporation (OPIC) in Washington DC.  She was an inaugural, and is now a program mentor, of IIS Leader of Tomorrow program, was voted a Leader to Watch in 2017 by Risk & Insurance, and is a strong market advocate for female founders and entrepreneurial leadership driven by diversity.

Dawn earned her Bachelor of Arts in International Studies from American University’s School of International Service, and she has studied French at the graduate level at the Université de Caen Normandie as a Rotary Graduate Scholar and holds Advanced program certifications from the Institut Européen d'Administration des Affaires (INSEAD) and the University of Chicago Booth School of Business.