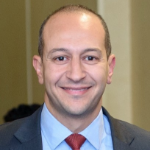 Sherif Elbehery is currently the Head of SMEs & Micro Finance for Banque Misr, a position he has held since April 2017, bringing a variety and diversity of expertise to the role having worked in various areas throughout his career in SMEs, Retail banking, Finance, Business Development and Strategy capacities.

Prior to this post, Sherif has been the Director of Retail & Business Banking for Barclays Bank Egypt, a role he successfully held for 3 years.

Sherif joined Barclays Bank Egypt in 2010 as the Director of Strategy, Planning, and Marketing & Corporate Affairs. Prior to that, he was based in UAE- Barclays Africa Centre, where he has spent nearly four years moving between senior roles in the Emerging Markets Centre and Russia.

Sherif assumed a number of positions at Vodafone and Citigroup, including Head of Business performance and Business Manager for Middle East and North Africa Global Transactional Services respectively.

Sherif holds a degree in Business Administration from Ain Shams University, and is a CFA Charter holder.