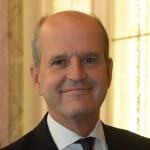 In 2005, he became Deputy Chief Executive Officer and Vice-Chairman of the Management Board of VUB Banka where, in August 2007, he was appointed Chief Executive Officer and Chairman of the Management Board, a position which he held until September 2013. Over the years his other responsibilities also included board member positions at Uruguayan, Chilean, Paraguayan and Slovak Bankers Associations and at Italian-Uruguayan, Italian-Chilean and Italian-Paraguayan Chambers of Commerce. He also held the position of President of the Italian-Slovak Chamber of Commerce (2009 – 2012).