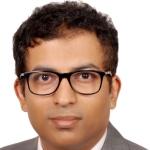 Raja Debnath has been with IFC since 2012 and has worked extensively across Middle East, Eastern Europe and South Asia SME banking engagements. In his current role he actively leads multiple engagements in South Asia and provides thought leadership across multiple SME banking niches -  supply chain finance, non-financial advisory services and digital finance for SME banking. He joined IFC from EY where he was the SME and Consumer banking Specialist for India. Prior to this he had worked at leading organizations like Citibank, ABN Amro, GE Finance, Kotak Mahindra where he helped setup large consumer and SME finance businesses. He is an SME himself; he owns an award winning chain of restaurants in India. His first stint at being an entrepreneur was the setting up a service apartment chain, which he successfully exited from. He has an MBA in Finance from the Said School of Business at Oxford University and an MBA in Marketing from JBIMS, Mumbai.