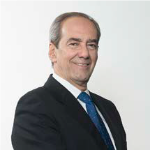 José M. González-Páramo is Ph.D., M.Phil. and M.A. in Economics from Columbia University. He also holds a Ph.D. from Universidad Complutense de Madrid.

His professional record is a blend of central bank decision-making and private sector responsibilities, academic experience and advisory positions. In 1988 he was appointed Professor of Economics at UCM. In addition, he has taught advanced courses in economic analysis of public policies at the Centro de Estudios Monetarios y Financieros in Madrid and at other research centres. From September 2012 he is a Professor at IESE Business School.

A Fulbright scholar, José M. serves as Vice-chairman of the Fundación Consejo España – EE.UU and chairman of the Fundación Consejo España-Perú. He is a member of the European Academy of Arts and Sciences, and has received a number of distinctions, includingthe Charles the Fifth Medal of the German-Spanish Chamber of Commerce ("contribution to a more united Europe"), Premio Institut D’Estudis Financers a la Excelencia Financiera ("professional career"), Premio Círculo de Empresarios and Doctor Honoris Causa (Universidad de Málaga), among others.