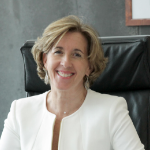 Secretary of State for Economic and Business Affairs - Spain

Ana de la Cueva Fernández was appointed Secretary of State for Economic and Business Affairs in June 15, 2018. In her capacity as Secretary of State, she is responsible for the development of economic policy, macroeconomic forecasts, development of sectoral and other policies that affect the economy, the State Treasury, public debt management, financial policy and prevention of money laundering. She is also Alternate Governor in several International Financial Institutions.

Before assuming her current duties, she has held various positions in the Ministry of Economy, such as responsible for the Technichal Secretariat of the Government’s Economic Matters Commission and chief of cabinet for the Secretary of State of Economy. In addition, she has been Deputy Director General for the Economic Affairs, Assistant Deputy Director General for financial support for exports and senior advisor for external debt matters in the Spanish Treasury.

She has also been a member of the board of directors of CESCE (the Spanish export credit agency), the State Company Expansión Exterior and the Sociedad Pública de Alquiler.

She graduated in Economics at the Universidad Autónoma de Madrid. She is a State Economist and Trade Expert and speaks fluent English and French.