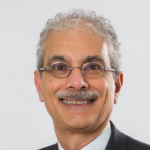 Paul Andrews was appointed as Secretary General in December 2015 and joined IOSCO in March 2016.  In this role, he is responsible for supporting the pursuit of IOSCO’s strategic objectives and leading the General Secretariat.

Prior to joining IOSCO, Mr. Andrews spent 18 years at the Financial Industry Regulatory Authority (FINRA) in Washington DC.  From 2003 to March 2016, he served as Vice President and Managing Director, International Affairs, at FINRA, the largest independent regulator for all US securities firms. In this capacity he directed FINRA's international engagements and worked closely with key regulators and regulatory bodies worldwide, including IOSCO.

Prior to FINRA, Mr. Andrews spent eight years at the U.S. Securities and Exchange Commission.  During this time, he worked in the Division of Market Regulation (now Trading and Markets) and the Office of the General Counsel.  In these capacities, he led the international affairs office in Market Regulation, analyzed various legal and policy issues concerning the structure of securities markets, market intermediaries, and dispute resolution.  Prior to the SEC, Mr. Andrews spent four years in private legal practice in Washington, DC.