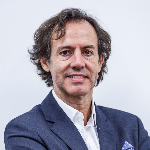 Ramón Blanco Duelo is the co-Founder and CEO of Bewater Funds, and co-Founder and Advisor of Indexa Capital. He holds a CCEE and Law degree from ICADE (E3) and was a Fulbright scholar at Harvard Business School, where he earned an MBA degree. He began his career working in marketing at Unilever, continuing in investment banking at Banco de Santander, before founding Selftrade.es in 1992. Selftrade is an online broker whose parent company debuted on France’s Stock Exchange. In 2002, Selftrade was sold to Boursorama Banque (part of the SG group with a market capitalization of 1.000 million euros).

Ramón has been Deputy CEO for Boursorama Banque (France), President of Onvista Bank (Germany) and Vice-President of Selftrade Bank (UK). He has also been an investor in numerous startups (Idealista, Sindelantal). Ramón won 15 Rugby championships for Spain and is currently a Professor for the Financial Markets Master’s program of Garrigues.