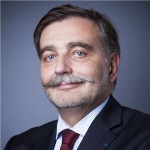 Pascal Lagarde graduated from the École Polytechnique (‘82) and the École Nationale Supérieure des Techniques Avancées. He began his career as head of program at the General Delegation for Armament of the French Ministry of Defense, in the telecommunications sector (1987‐1993). At the Ministry in charge of the Industry (1994‐1998) he became successively the assistant of the “electronic components” assistant director and “IT and telecommunications” assistant director.

Following the creation of Bpifrance, Pascal LAGARDE has been appointed in July 2013 Executive Director of Bpifrance, in charge of strategy, development, international affairs and ESG.

In 2016, Pascal was appointed Chairman of The Montreal Group, a global forum for development banks focused on micro, small and medium‐sized enterprises.